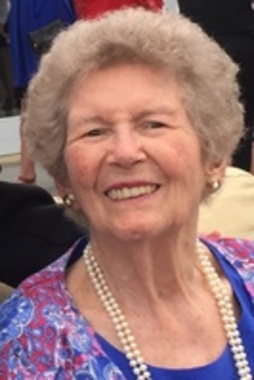 Back to Harriet's story

Upon graduation she became a stewardess with Northeast Airlines until her marriage in 1951 to the love of her life, Edward Joseph Palmieri. Harriet demonstrated her love and devotion to her husband when he became a quadriplegic and she cared for him in their home in Andover, along with her four young children. She was always appreciative of her large and generous family who helped her through that difficult time. Before her husband's accident, Harriet had taught school briefly in Methuen at the Searles School and was the recipient of a federal grant to develop a program for gifted mathematics students. Her husband died and she returned to teach at the the Kane and Frost Middle Schools in Lawrence. Upon retirement, she received an award for her devotion and commitment as an educator.

Harriet Palmieri was an avid bridge player and a member and past President of the Shawsheen Village Women's Club, a member of the Greater Lawrence Women's College Club, and a founding member, with her deceased sister Helen Gaffny Driscoll, of Far Corner's Women's Tuesday Golf League.

Harriet was the second generation in her family to graduate from Tufts. She was one of the first women to serve on the Tufts Jumbo Club and received a Jumbo Club Award from Tufts University as a three sport athlete, wife of a Tufts athlete, mother of four Tufts athletes and an active member and officer of Tufts athletics programs in 1982. In addition, she received Tufts' highest alumni award for Distinguished Service in 1987.

Harriet will be dearly missed by her loving children: Elaine P. Cook and her husband Frederick A. Cook of East Grand Rapids, MI and Las Vegas, Nevada; Ann L. Palmieri of Andover, MA; James J. Palmieri and his wife, Patricia of Prescott Valley, AZ. In addition, she leaves her grandchildren: Amy R. Palmieri of Boston, MA; Christopher Palmieri and his wife, Nicole, of Malden, MA; Frederick A. Cook III of East Grand Rapids, MI; James E. Cook and his wife Kelli, of Grand Rapids, MI; and Thomas H. Cook of Dayton, OH; her great grandson, Samuel A. Cook of Grand Rapids and his brother-to-be in 2020. She is also survived by her sister Margaret A. O'Connell of Methuen and sister-in law, Lorraine L. Gaffny of Hampton and Windham, NH.

In addition to her late husband, Harriet was predeceased by her beloved son, Edward J. Palmieri, Jr., her brothers Edward P. Gaffny and John J. Gaffny, her sisters Catherine E. Sheppard, Helen G. Driscoll, Anne G. Morrissey, and Theresa G. Murphy.
Her Funeral Mass will be celebrated in St. Augustine Church, 43 Essex Street, Andover on Thursday, December 5, 2019, at 11 AM. Relatives and friends are most welcome to attend. Calling hours have been omitted. Interment will be held in the Spring Grove Cemetery in Andover. In lieu of flowers, contributions may be made to the charity of one's choice. For additional information, please visit, www.burkemagliozzi.com.
Published on December 5, 2019
To plant a tree in memory of Harriet (Gaffny) Palmieri, please visit Tribute Store.

Plant a tree in memory
of Harriet

A place to share condolences and memories.
The guestbook expires on May 31, 2020.